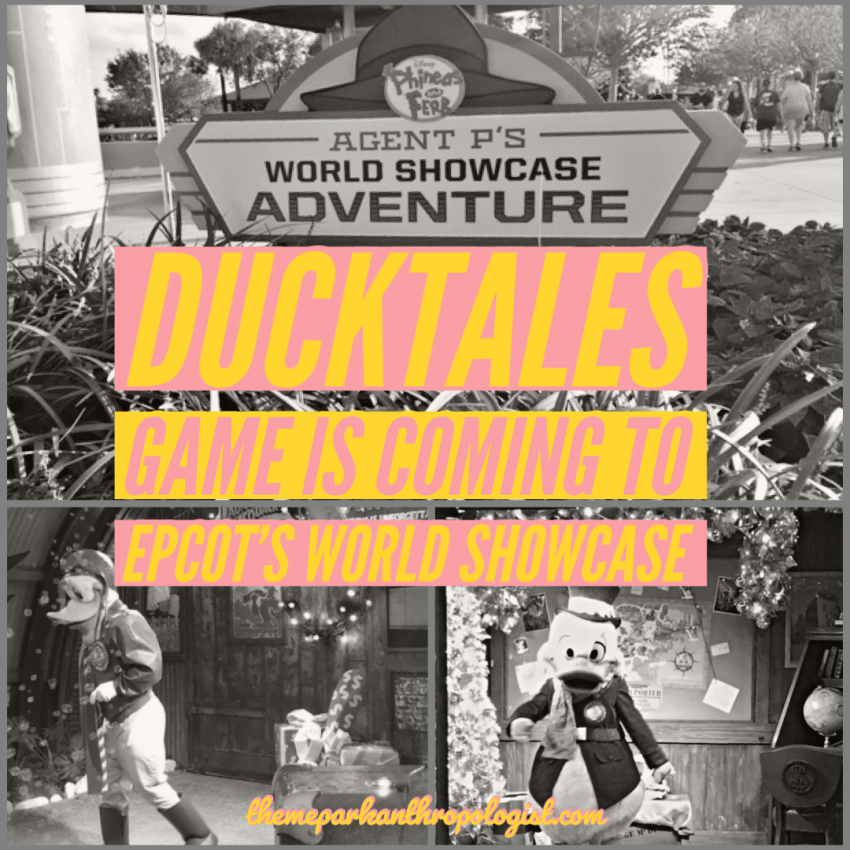 Back when Agent P was a Kim Possible themed game, I’d love to play this World Showcase scavenger hunt. I enjoyed all of the colorful villains we’d encounter.  I liked that we received a “Kimmunicator” so playing the game didn’t use up my phone’s battery. This game had a lot of cute elements that even got some of the cast members involved.

For some reason, I’ve never gotten into the Phineas and Ferb incarnation. I played a couple of  missions and lost interest. The game felt a little out of place in the World Showcase, like Agent P was a placeholder.  It also could be that I’ve never watched the show. Therefore, I didn’t have a connection to the characters, but I do watch DuckTales and I am elated that this game will soon be a Ducktales themed scavenger hunt.  Woo-oo!!!

Are you ready to become a S.H.U.S.H. agent and help the DuckTales gang look for treasure while saving the World Showcase? I have dreamed of this day since I was a child.  I REALLY hope Professor Ludwig Von Drake is incorporated into this game. I mean…the “edutainment” theme park NEEDS a professor, right?

Here are the missions I hope to complete:

Mexico- Don Karnage has captured Dewey and the Three Caballeros and has forced them to perform at the base of a volcano that could blow at any moment.  While Don Karnage and the sky pirates watch from above, it’s up to us to stop his narcissistic plan to eliminate performers with more talent than him.

China- Toad Liu Hai has set a plan in motion that will absorb all the luck of the world through magical fortune cookies.  We must stop production before they end up in restaurants throughout the world.

Germany- Black Heron just discovered a supply of gummiberry juice in a little village outside of the Black Forest.  We must help Scrooge and Mrs. Beakley get to the last of the gummiberry juice before it falls into the wrong hands.

Japan- Mark Beaks and Gyro enter a robotics competition in Tokyo.  The robots develop a taste for global destruction after competing. We must help Gizmoduck save the day.

United Kingdom- Glomgold and Scrooge battle for the ultimate prize…a giant, magical, golf ball that has the power to stores all the stories and knowledge of the world.

France- Magica De Spell is about to release a new perfume that will cause all who smell it to become a member of her shadow army.  We’re off to Paris with Webby and Lena to stop Magica.