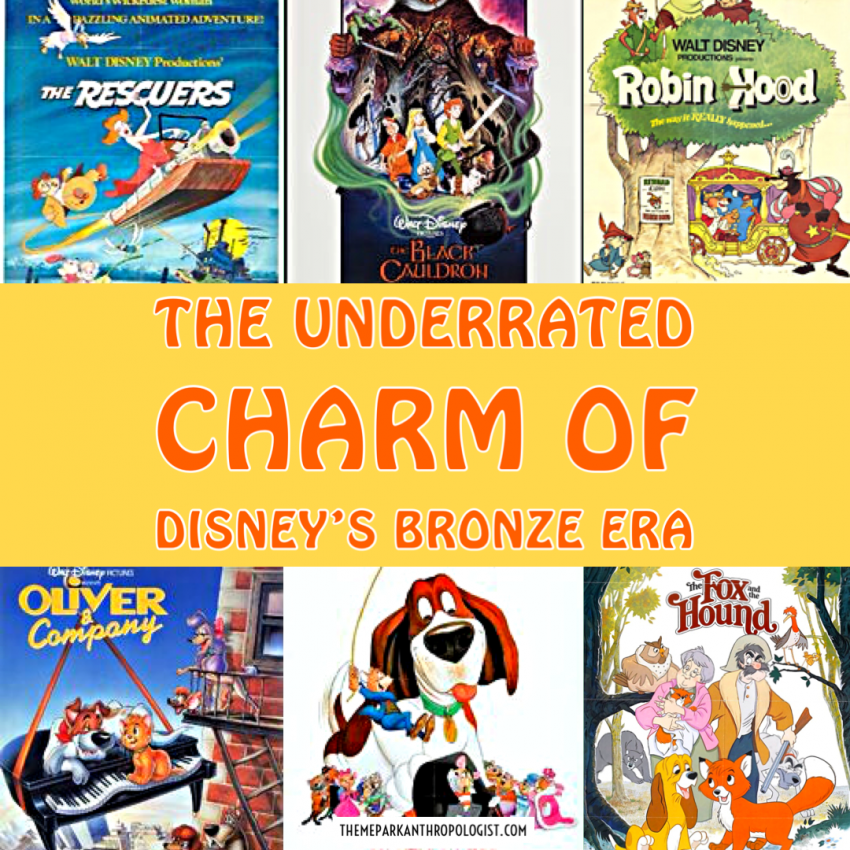 The Bronze Era (1970-1989) of Disney animated films is usually seen as the “Dark Ages.” These are the films that were created after Walt’s death and, as a result, do not have his artistic vision or touch. It gets criticized for being too dark from the periods before it and after it. These films have also been described as “grungy” for their thick lines and rough animation. I actually think this animation style fits these films perfectly. It gives them a storybook look that goes well with the simplistic narration of these films.

The animators did not have the luxury of being supported by management, and they did not have the same resources available to them that previous periods had enjoyed. You have to admire the out of the box thinking and resourcefulness of these animators to still be able to create animated classics amongst these restraints.

Perhaps it’s because I love a good underdog story, but I find these animated films to be charming and timeless. Some of my favorite Disney animated films come from this era, and sometimes it’s nice to have a break from the larger than life fairytale narratives.

Here’s how I would rank the Bronze Era Disney films. This was actually a pretty hard list to make because I enjoy all of them.

Here, we watch two unlikely creatures become best friends. It’s a sweet story about friendship and tolerance. I would probably score it higher if the ending didn’t make me so sad. For that reason, it doesn’t have a high repeatability rate for me.

This film is like the cat lover’s 101 Dalmatians. I enjoy the music of The Aristocats and the charming story. However, there are some scenes that haven’t aged well.

Robin Hood gets criticized for borrowing from previously Disney animated films like the Jungle Book and Snow White. The story has some spots that drag. Despite this, the music of Roger Miller and the flamboyant villainy of Prince John make this one of my favorite animated films.

It’s probably most well known for being Disney’s darkest animated films. The Black Cauldron was an ambitious undertaking that was not able to see its full potential due to shifts in leadership. It was still one of the most expensive animated films at the time and flopped at the box office. I enjoy the dark aesthetic of the film and it features heavily in my Halloween film rotation. While it wasn’t popular at the time of its release, The Black Cauldron has obtained a cult following.

This “modern” twist on Oliver Twist will always have a special spot in my heart. It was one of the first films that I saw in a theatre. This film gets criticized for looking too 80s and not aging well, but I don’t see that as a bad thing. I love the 80s look and sound, and eventually (if not already) it will have a nostalgic, vintage appeal to it.

I just loved the idea of these international mice running their own Rescue Aid Society within the United Nations. Bianca and Bernard are two of the most charming characters. I find their relationship far more endearing than anything that Mickey and Minnie have. Mickey and Minnie are adorable too, but Bianca and Bernard are more adorable (in my humble opinion). This film succeeds on so many levels for me. It has a great setting (the swamp), terrifying villain (Madame Medusa), humor, and adventure.

The Great Mouse Detective truly is a GREAT film. This Sherlock Holmes-type tale breaks the grungy animation mold that defined the era and paved the way for Disney’s Renaissance Era. The film features the legend of horror films,  Vincent Price, as the despicably flashy Professor Ratigan. The music was written by  Henry Mancini, who wrote Hollywood classics like “Moon River” from Breakfast at Tiffany’s. It is one of the most underrated Disney animated films ever made. If you have never seen it, do yourself a favor and watch it right now.

The Many Adventures of Winnie the Pooh (1977)

The Many Adventures of Winnie the Pooh might epitomize the best of the Bronze Era characteristics in the best of ways. The simple animation works well with the simple tales from this children’s classic story. The Pooh stories were originally made as shorts to accompany other films in the theatre. Needing to utilize some resourcefulness due to budget reasons, the animators stitched these shorts into a feature film. You would think that it wouldn’t have worked, but it became a timeless classic.