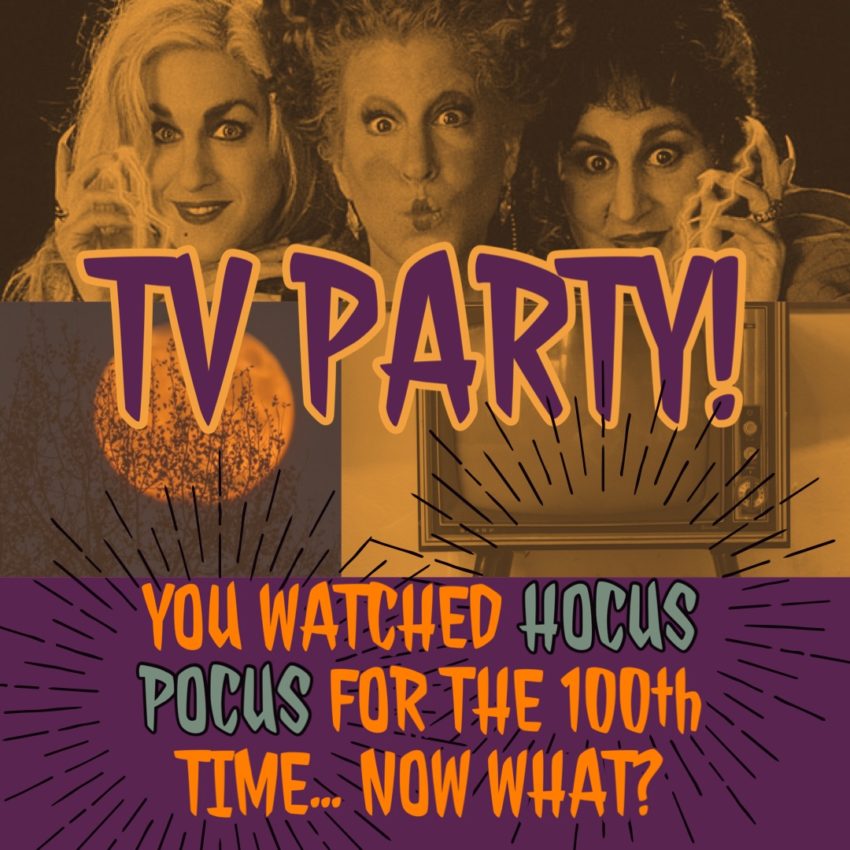 If you haven’t already heard, this year marks Hocus Pocus’ twenty-fifth anniversary. Disney has rolled out special merchandize, events, and programming to celebrate this cult classic. It’s been almost a decade since I last watched Hocus Pocus. So I recently viewed it again. I have to say that I’m a little terrified that, as a thirty-something, I now identify with the Sanderson sisters’ quest for eternal youth. Re-watching Hocus Pocus inspired me to binge watch other shows and movies with a similar theme of the quest for eternal life and youth. These are just some that come to mind, but I would love to hear your Hocus Pocus inspired picks in the comments below!

This TV show follows Marshall (Omri Katz) and Simon (Justin Shenkarow) as they investigate supernatural occurrences in the small town of Eerie, Indiana. No one else in the town believes them so it is up to them to save the oblivious townspeople from the strange happenings. In one particular episode, a group of people appear to never age. For decades, they have remained the same. Marshall and Simon discover that there are secret “Forever Ware” parties, like Tupperware except it seals in the freshness of their youth. Too bad the Sanderson sisters were burned before the invention of Forever Ware. Eerie, Indiana had a great cast and notable guest stars like John Astin (Adams Family), Stephen Root (True Blood), and Henry Gibson (The Burbs). It’s a shame that the show only ran for one season. It had some great family friendly stories and frequently referenced horror film classics.

What Hocus Pocus fans will love about this show: Omri Katz (AKA Max), Jason Marsden (AKA the voice of Thackery Binx), clueless parents in need of saving, and nineties nostalgia.

Stardust is based on the 1999 novel of the same name by the talented fantasy writer, Neil Gaiman. Seriously, he’s amazing! The film follows Tristan (Charlie Cox) as he goes in search of a falling star to give to his crush, Victoria (Sienna Miller). When he finds the star, he is surprised to find that the star is a “person” (Claire Danes). Meanwhile, three witch sisters are also searching for this fallen star. They need to consume a star to remain young and beautiful…sounds familiar. If that’s not enough tension to the plot, the dying King of Stormhold (Peter O’Toole) threw an enchanted ruby out into the sky and told his sons whoever retrieves it will become the new King of Stormhold. The ruby lands in the same place as the star leading to a myriad of villains on Tristan’s trail.

What Hocus Pocus fans will love about this film: Three witch sisters in search of eternal youth, and an awkward, love-sick protagonist.

I loved this show! The cinematography, the colorful sets and characters, and the costumes…if I wished upon a star, it would be to own every outfit worn by Charlotte “Chuck” Charles. The story follows Ned (Lee Pace), a pie maker with a special gift to bring back the dead as he helps private detective, Emerson (Chi McBride), solve crimes. The catch is that he can only bring back someone from the dead for a minute before someone dies in their place. The story takes an unexpected turn when his childhood sweetheart, Chuck (Anna Friel), dies unexpectedly. Ned makes the decision to bring her back to the land of the living permanently. Now she will never die or grow old…as long as Ned never touches her. Like Eerie, Indiana, this show ended too soon. It was whimsical and clever. Did I mention the pies? Make sure you’re well stocked on pie before you binge this show. Trust me. YOU. WILL. WANT. PIE.

What Hocus Pocus fans will love about this show: Witty banter, the friendly undead, costume designs, witch-like sisters, and an occasional musical number

This Hayao Miyazaki film has a strong theme about the quest for eternal youth and beauty, but discovering that appearances can be deceptive. Howl (Christian Bale) is a vain wizard who has used spells and charms to hide who he really is from others. He meets Sophie (Emily Mortimer and Jean Simmons), a shy, plain girl who works in a hat shop. The Witch of the Waste (Lauren Bacall), who also uses magic to alter her appearance, becomes jealous of Sophie and turns her into an old woman. Appearances continue to alter as do the perceptions of the characters themselves. This is a beautiful film both visually and narratively speaking.

What Hocus Pocus fans will love about this film: A witch obsessed with youth and beauty, helpful sidekicks, and enchanted creatures with strong spells that need breaking.