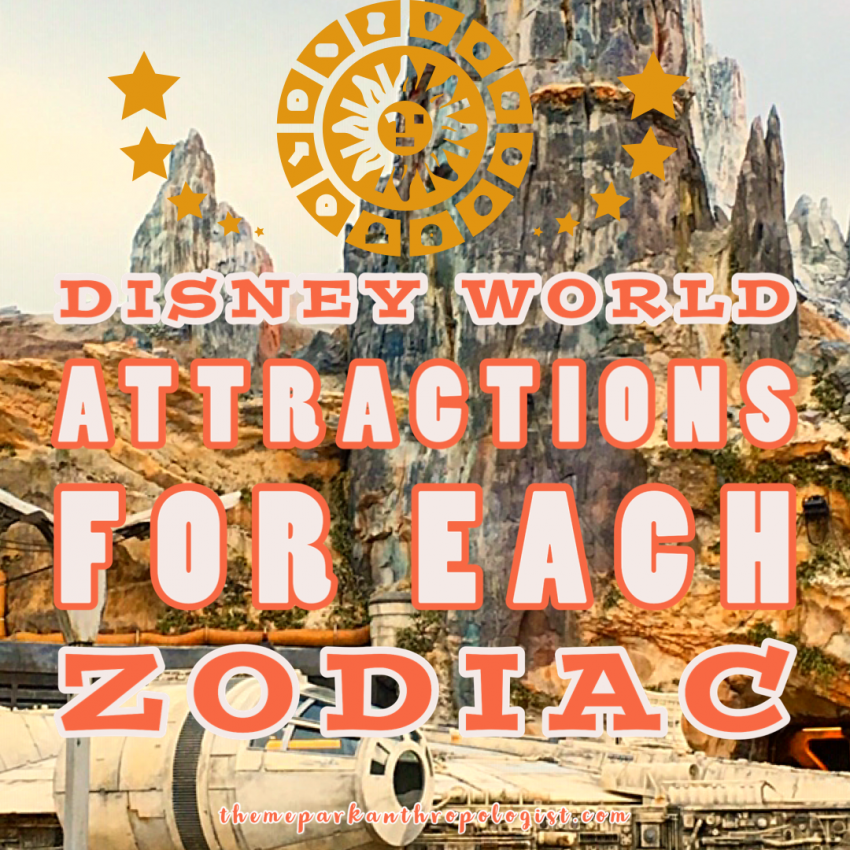 We recently had a fun little debate about which Disney World attractions match best with the different zodiac signs. While we didn’t agree on all of these, here’s the final list. I would love to hear which attractions you would put with your zodiac sign in the comments below.

This dreamy bunch are likely to be found near water and other fantastical landscapes:

Frozen Ever After  (Epcot)

Under the Sea- Journey of the Little Mermaid (Magic Kingdom)

The Seas with Nemo and Friends (Epcot)

Aries have the need for speed. You’ll likely find them at attractions that simulate race cars and motorcycles:

This nature loving sign is most likely to be found at Animal Kingdom getting up close to the animals and learning more about conservation:

Geminis are likely to seek out the attractions with the most state of the art technology and line queues that will keep them from getting bored:

This sign is likely to enjoy classic and family-friendly attractions:

The Many Adventures of Winnie the Pooh (Magic Kingdom)

Leos are likely to want to show off their bravery and have a little friendly competition; where they have the opportunity to shine:

This group is likely to enjoy attractions where they can analyze and examine the mechanics. You’ll find them on behind the scene tours too:

Libras like what is trendy and up and coming. It’s quite possible that they haven’t even experienced their favorite attraction yet. They’ll also want to enjoy attractions with their friends. Fun photo-ops are a major plus:

Splash Mountain- Reimagined as Princess and the Frog (Magic Kingdom)

This broody bunch are likely to enjoy attractions that get a little dark and scary:

These thrill seeking adventurers are all about exploring mountains and foreign landscapes. They’re not likely to shy away from a pun-filled adventure either;

Pirates of the Carribean (Magic Kingdom)

Capricorns are most likely to find the value in “edutainment” and can be most often found at Epcot:

Living with the Land (Epcot)

These are the hardcore Figment fans. You’ll likely find them doing something artistic at the Festival of Arts or going to underrated attractions featuring underrated creatures:

The Animation Experience at the Conservation Station (Animal Kingdom)

It’s Tough To Be a Bug (Animal Kingdom)