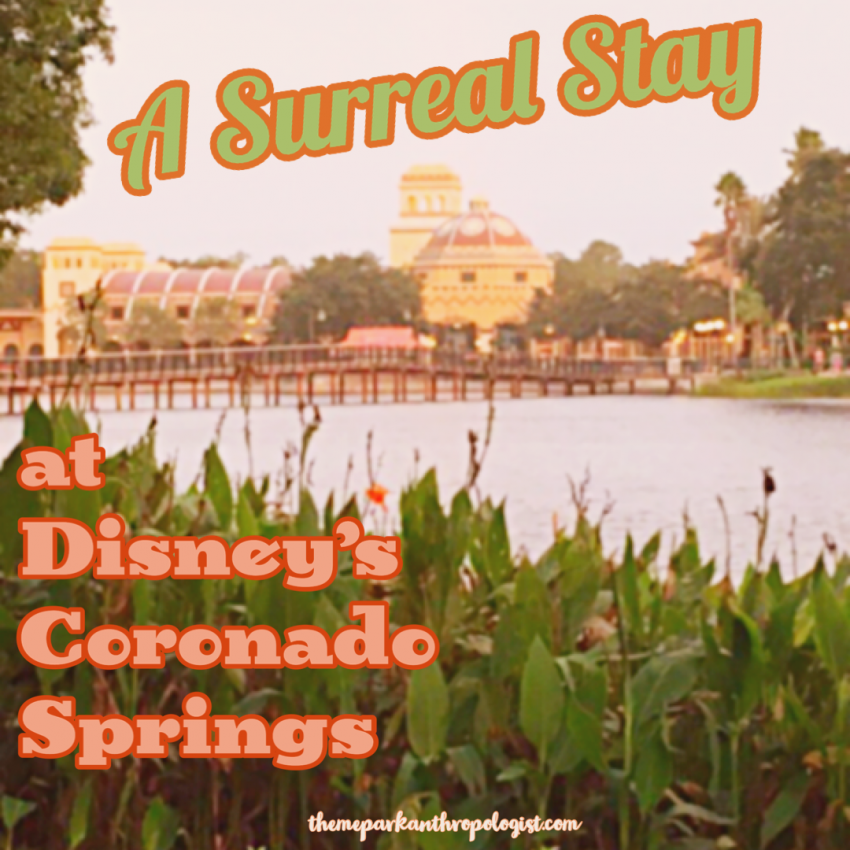 Coronado Springs has undergone a major transformation over the past few years. The biggest of which is the addition of Gran Destino Tower. Gran Destino Tower is loosely inspired by Salvador Dali and Walt Disney’s collaboration in the making of the animated short, Destino. I’m a huge Salvador Dali fan, but have put off a visit to the new resort because I found the photos of the new structure to be a bit bland and very un-Dali.

Coronado Springs is also one of the remaining Disney World resorts that I have not visited. Despite many resort experiences being closed at the, I decided to book a stay to give me an opportunity to explore the resort style and limited offerings. Here, I will go over my general impressions from my visit to the resort rather than giving a comprehensive overview of Coronado Springs.

After we got settled into our room, we decided to go exploring. The first thing we noticed is that there were very few cast members around to answer our questions. It was a bit like walking through a Dali landscape where you think you might see someone who could be there, but your mind is playing tricks on you. We went to visit guest check-in and did not see anyone there. We also saw very few other guests. We wandered and found most cast members to be at the food locations. They were very friendly and accommodating, and trying to make the best out of a bad situation.  The lack of cast members is sad and their absence is definitely felt.

Food: The Persistence of Hunger

At the time of our visit, only Three Bridges and Dahlia Lounge were serving up items that would interest vegetarians and vegans. We tried to join the virtual waitlist for Three Bridges, but the app (as usual) was a bit glitch-y and would not allow us to join. We headed over there in person to see if we could join. It seemed as though this was a common problem. The cast member informed us it would be 45 minutes until we could be seated and suggested we go to Dahlia Lounge. It was weird to have such a long wait at a resort that felt like a ghost town, but that could be due to social distancing at the tables. We were starving and headed over to Dahlia Lounge, located on the sixteenth floor of Gran Destino Tower.

Dahlia Lounge is one of the few spots that I genuinely felt captured the spirit of Dali and Disney. Here, you’ll find photographs and artwork of or inspired by the work of the two men. I have to say that the view of the Walt Disney World Resort  from the sixteenth floor was amazing and I would recommend that you visit at least once to experience it (my photos were too dark to see anything).

There is a small tapas style menu here along with cocktails. Again, we were starving. It was a struggle to find something that did not have animal products, but the server worked with the chef and made us a plate of artichokes that were cooked in an airfryer and a HUGE bowl of olives. Both were delicious and had a unique flavor. It was the perfect accompaniment to our cocktails (Gran Gin Tonic and Tequila Daisy). The service was stellar and I would come back here for a cocktail again. However, I think I had a lifetime’s worth of olives.

I was disappointed that we could not find a full vegetarian or vegan meal on property, but it’s possible that this has changed since our visit to the resort.

We stayed in the Casitas Village area. I love the theming of the three villages (Casitas, Rancheros, and Cabanas) and the kitsch representation of Mexican and Spanish architectural styles. The interior was spacious and comfortable. Every inch of space seemed like it was being fully utilized. The room had sprinkles and nods to The Three Caballeros. It definitely feels more sophisticated than the exterior of the resort.

Over at Gran Destino Tower, there are sprinkles and nods of Dali through the lobby area. I have to admit that I hate the exterior. I find it boring and uninspiring. It feels like it would be more at home in the Disney Springs area. The interior is interesting in a cruise ship atrium kind of way. I can see some inspiration from Dali and Spanish architecture, but, overall, the design feels too safe.

When invoking two men who made it their lives’ work to push artistic boundaries, I would have expected more from this resort. I understand that Disney is moving away from kitsch and more towards a mainstream sophistication. However, this is one instance when kitsch would have been more appropriate.

This resort felt like a stroll through one of Dali’s desert landscapes.  The emptiness was apparent in almost every corner of the resort. This is not Disney’s fault. I understand that they are doing the best they can under the surreal circumstance we deal with daily.

The resort also suffers from an awkward juxtaposition of structures and environments that don’t belong. In a Dali painting, awkward juxtapositions are thought provoking and take us out of reality and into otherworldly landscapes. Gran Destino Tower is neither thought provoking nor an otherworldly dreamscape.  I believe that Disney really missed a golden opportunity to really push their creativity to the limits of this reality in order to play it safe.

Even with my annual passholder discount, I do not think this resort was worth the money. There wasn’t enough to keep me on property, and there are plenty of cheaper resorts if I only need a place to rest my head. I’m a bit disappointed with Disney’s transition away from kitsch designs in their resorts. The resorts are starting to feel too ordinary for me.